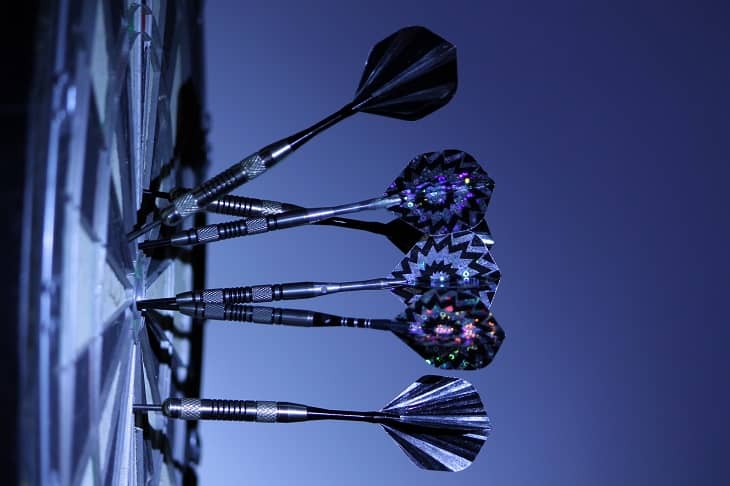 The game of darts is among those sports that have enjoyed a long history. Played in different times and civilizations, this sport has accumulated a wide collection of terms, phrases, and words. Over time, these terms have allowed this sport to develop a language of its own that’s quite essential to any darts player. So, if you’re a beginner looking to establish yourself, learning these common darts terms is an absolute must if you wish to expand your knowledge.

Given its long history, the game of darts has gained international popularity paving the way to the emergence of many dart terms. Therefore, as a beginner, learning some of these terms will be essential if you want to improve. In this guide, we will round up some of the most essential terms that will give you a deeper understanding of this majestic sport.

Common Darts Terms You Should Know: A Complete Guide

To expand your knowledge in the darting world, you need to understand most of the darts terminologies. This way, you’ll manage to play darts in different settings including in professional tournaments. Although we won’t mention all the terms that are there in darts, this guide will at least list some of the most essential terms that every beginner should know.

To make the list easy to peruse through, we’ll categorize these darts terminologies into three divisions starting with essential terms, followed by fun/cool terms, and lastly, technical terms. So, if you’re ready, then let’s begin.

Bounce-Out: When playing darts, there are times when the darts hit the board then come back falling on the floor. When this occurs, the correct term is a bounce-out. Bounce-outs usually occur when your darts hit the separating wires or if the tips are not sharpened correctly.

Bullseye: The bullseye is the red tiny part at the center of the board. Also known as the bull, this red circle is worth 50 points when hit. Although it’s not the highest-scoring portion on the board, it plays a significant role in some dart games such as determining who will throw first in a game.

Bull Out: A bull out is a term used in a game where a player must hit a double bull to finish a game.

Busted: Common in the 01 games, busted is used when a player exceeds the number of points that are needed to end a game. For instance, if you hit a triple 2 instead of a double 2, then your points will remain the same and you’ll have to wait for the next round.

Bull Up: Also known as ‘Bull Up Challenge’, this is a process used to decide which player will be throwing first in a game.

Chalk: When playing darts in a recreational setting, you’ll need to use chalk to mark the scores on the chalkboard.

Cork: This term is sometimes used to refer to the bullseye.

Double Bull: This is the centermost part of the bullseye and it’s usually red.

Double In: This phrase is mostly used when playing the 01 games. It means one must hit the double section of a number to start the game.

Double Out: Still in the 01 games, one must hit a double number to finish the game.

Double Top: The double top refers to the double 20 when playing.

Hockey: The oche or rather the line where players are supposed to position themselves on can also be called the hockey.

Leg: A leg is a darts match or a single competition.

Over Achiever: This slang term is used to refer to a player that scores too many points when finishing the 01 games.

Pie: This is simply the numbered region on a dartboard.

Rail: This is the wiring that forms the segments on a dartboard.

Round: A round is usually used to refer to a player’s turn to throw the darts.

Round of 9: When a player hits three triples with all three darts, then it’s referred to as a round of 9.

Toe Line: This is another term that refers to the throwing line.

Throw: Also known as a round, this is a player’s turn to throw the darts.

Throw Line: Also refers to the toe line or the oche.

Tops: This refers to the double 20.

Wiring: Wiring is a slang term used when a dart bounces off the wire.

Ace: When playing the 01 games and you suddenly hit a double 1, then it means you’ve shot an ace.

Arrows: We all know that darts originated from a military setting. Since soldiers used arrows at that time to shoot stationary logs of wood, the same term can also be used to refer to a set of darts.

Average: In darts, the average is the combined score of all three darts.

Big Fish: This term is used to refer to the highest 170 check out that requires you to hit at least 2 treble 20s followed by the bullseye.

Break: A break is a situation where the winning player threw the darts second.

Bombs: If you’re playing darts with a set of extra heavy darts, then these darts are referred to as bombs.

Bed and Breakfast: Also known as Breakfast, Bagadix, or Chips, Bed and Breakfast is a slang term used to refer to the score of 26. This usually happens when a player hits a 20, a 5, and a 1 with all three darts in a row.

Basement: This is a term used to refer to a double 3.

Black Hat: If you hit the double bullseye in one throw with all the three darts, then it’s termed as a black hat.

Black Dog: In some dart games, the double bull is simply referred to as the black dog.

Clock Board: This is a dart term that refers to the dartboard itself. The phrase is associated with games such as the ‘Round the Clock’.

Chalker: This is the name given to the person marking the scores on the chalkboard during a game.

Cracked: When aiming at a double and you accidentally hit a single, then this is referred to as a cracked.

Chucker: This refers to a person that throws a dart passively without aiming anything on the board.

Dirty Darts: This slang term is mostly used to refer to questionable tactics when playing darts.

Downstairs: Refers to the lower portion of the dartboard.

Dust: This is when a dart misses the target and lands outside the scoring area.

Dead Eye: Refers to the center hole in the bullseye of a soft tip dartboard.

Eights: This slang term refers to 18s when playing the Cricket dart game.

Easy In and Easy Out: Just as the names suggest, easy in and easy out means that you don’t have to hit a double when starting or ending the 01 games.

Fives: Fives is a quicker way to say 15s in a Cricket darts game.

Flatline: This slang term is used when a player misses the target with all three darts.

Game On: This is usually a call for silence from the crowd before the game of darts begins.

Game Shot: This is the winning shot in a game of darts.

Hail Mary: When the last dart scores a surprisingly higher score as compared to the previous two, then it’s called a Hail Mary.

Hat Trick: This is when a player hits the bullseye with all three darts in a single round.

Island: The scoring area in a dartboard is referred to as the island.

Island Woody: If a dart lands outside the scoring area, then it’s called an island woody.

Lipstick: This is when a player hits the triple 20.

Little: In a dartboard, the area that stands between the bull and the triple is referred to as the little.

Madhouse: This slang term is mostly used to refer to a double 1 in the 01 dart game.

Mugs Away: Mugs away is a slang term that means the loser in the current game will start in the next game.

Nines: When playing the Cricket dart game, nines refer to 19.

Patriot: Patriot refers to when a player hits a triple or the bull with the first throw.

Premature Projection: This refers to a player that gets overexcited and throws before his/her turn.

Robin Hood: This is a rare situation where a dart sticks at the back of another dart on the board.

Route 66: This is another rare situation where a player scores exactly 66 points in one round.

Shanghai: A shanghai refers to when a player hits a single, a double, and a triple of the same number in one round.

Single In/Single Out: Also referred to as a straight on and straight off, this is when a player starts or ends the 01 games without having to score the double.

Splash: Splash is when players throw two darts at the same time to determine who starts first in a game.

Straight Nine: When a player hits the triple 20, triple 19, and triple 18 in Cricket, then this is referred to as a straight nine.

Sunset Strip: This is when a player scores 77 points in a single round.

Sixes: In Cricket, sixes refers to 16.

Three in a Bed: When you hear the term three in a bed, then it refers to hitting the same number with all the three darts.

Ton: Normally used by dart commentators, ton refers to when a player scores 100 points or more in one round.

Tough Darts: Tough darts is an honest way to say a player tried but narrowly missed the target.

Trophy Darts: This term is used to complement a player for making an accurate throw.

Two Fat Ladies: When you score 88 points in a single throw, then it’s referred to as two fat ladies.

Upstairs: This is the upper portion of the dartboard.

Wet Feet: If you happen to step on the oche or get too close to the dartboard, then the slang term for this is having wet feet.

Wilson: If a player misses all three darts in a game of Cricket, then it’s referred to as throwing a Wilson or a flatline.

Barrel: This is the metal portion of the dart where a player holds when throwing.

Dartboard: The dartboard is the target where players throw the darts. It can be bristle, electronic, cork, or wooden depending on the type.

Flight: This refers to the feathery part of the darts that gives them an aerodynamic advantage.

Oche: In any game of darts, the oche is the throw line where players or darters stand.

Plastic Tip:  These are darts used in an electronic board.

Point: A point is the front section of a dart also referred to as the tip. It can either be plastic or steel.

Shaft: The shaft is the back section of the dart that rests between the barrel and the flights.

Soft Tip: Similar to plastic tip, this refers to those darts used on electronic boards.

Steel Tip: These are darts used on bristle boards.

Spider: Spider or spider web is a technical term used to refer to the rails or the wiring on your bristle board.

Sisal Fiber: This is the raw material used to manufacture bristle boards.

Tungsten: This is a tough and durable metal that’s normally used to manufacture high-quality darts.

Web: This is another term for the spider or the wiring that separates the segments in a dartboard.

As you can see, there are lots of dart terms and terminologies that are there depending on the region you’re in and the type of game you’re playing. Since most of these terms will have less impact when playing or learning how to play darts, we’ve managed to filter the most useful terms that can be of immense help. So, besides practicing how to play darts, perusing through these slang terms will help you enjoy playing this great and majestic sport.